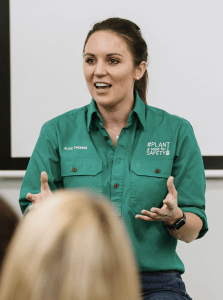 Originally from a remote sheep station, Alex is a speaker, facilitator, consultant and social entrepreneur, who’s passion for the health, safety and wellbeing of those in rural communities is inspired by her journey as a carer for her disabled Dad.

With a career in work health and safety spanning in excess of 16 years, Alex was the 2018 AgriFuturesTM Rural Woman of the Year (SA), the winner of the 2018 SafeWork SA Augusta Zadow Award and a National Winner in the 2020 Syngenta Growth Awards.

A Fellow of the Governor’s Leadership Program and a graduate of the National Farmers Federation Diversity in Agriculture Leadership Program, Alex’s work has been formally endorsed by the Executive Director of Safe Work SA.

Passion, professional rigour and an infectious energy for change are at the heart of everything she does.

For more information, check out alexthomasptyltd.com. 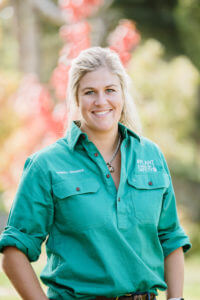 A genuine rural kiwi girl, Harriet Bremner is on a mission to change the ‘she’ll be right’ attitude towards health and safety in the New Zealand agriculture, food and fibre industries and rural communities at large.

A former primary school teacher, Harriet writes story books for rural children about her miniature dachshund, Poppy. Poppy teaches children important, practical life lessons, like how to use their ‘Think Safe Brain’ when out and about on the farm. She believes that sharing stories with children is extremely effective when it comes to engaging and educating them on important topics such as health and safety.

Until recently, Harriet worked as an advocate for New Zealand agricultural industry health and safety group Safer Farms, where she planted seeds for safety and spread the message that agriculture should adopt a practical approach to health and safety, that puts people first at all times.

“Put simply – people should be able to go to work and not die on the job.”

To learn more about Harriet’s books, check out gurtandpops.com. 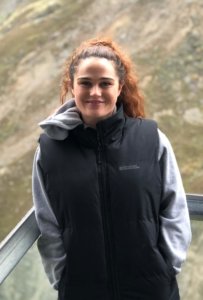 Erin grew up on a sheep and beef farm in the rolling hills of the King Country before eventually settling in Christchurch.

She spent five years as a journalist in the mainstream print, radio and TV industries before relinquishing a strong desire to return to her rural roots and be part of positive change – though this time, on the other side of the media fence.

The former Communications Manager for Safer Farms, Erin is inspired by rural men and women every day, transmitting their voices into channels to be heard by all New Zealanders.

Erin believes the stories of the people in agriculture, food and fibre deserve a chance to be told, heard and understood by everyone in New Zealand, and used to influence and empower one another.

She is extremely proud to be a small cog in the wheel of the #PlantASeedForSafety initiative, spreading health, safety and wellbeing messages far and wide.

“It only takes one person, one message and one story to influence someone and save a life.”